All concerts are in association with The Arts at Dartington.

Tickets for non-members for all concerts are £12 except for the 4th November concert in Dartington which are £14. Tickets for students & under 18s are £5.
All tickets are available in advance from the Dartington Box Office 01803 847070 (daily from 12.30 to 7pm) or online at www.dartington.org from 1st July or on the door.

A programme of exquisite secular solo cantatas and oboe sonatas from Alessandro Scarlatti, Lotti, Vivaldi and Handel (who spent 3.5 years in Italy). All were influenced by the Italian Academy of Arcadia of which Scarlatti was a member, and which favoured a simple idyllic, pastoral style. The ensemble's eponymous CD has already been much enjoyed by committee members ("they are stunning and will go down a storm" wrote one). 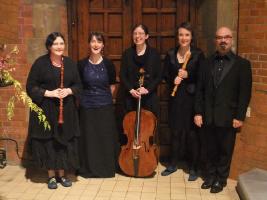 American soprano Emily Atkinson has appeared as a soloist in more than forty Bach cantatas with the Sweelinck Ensemble. She has toured extensively with the Tallis Scholars, and performs with viol consorts, baroque chamber groups and other early music ensembles in the UK and abroad.

Belinda Paul (oboe and recorder)·is co-founder of Concentus VII, and plays and records with orchestras including The Academy of Ancient Music, The Sixteen, The Gabrieli Consort and Players and Ex Cathedra.

Dan Tidhar (harpsichord) has directed the Cambridge University Baroque Ensemble for several years, and has performed as a soloist and continuo player with ensembles such as The Kings Consort and Chelys.

Sophie Willis (cello) has performed with singers such as James Bowman and Emma Kirkby and with orchestras such as the European Union Baroque Orchestra and Florilegium. 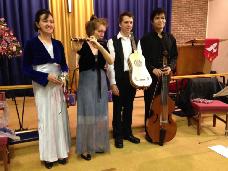 From the Wigmore Hall to the windswept islands of Shetland, The Brewery Band are the vibrant new approach to historical performance. NB This is not the Bristol/Somerset based ceilidh band of the same name.

Performing mainly from memory, baroque violinist Morag Johnston and internationally acclaimed lutenist Matthew Wadsworth (for this concert playing a theorbo) breathe new energy into an exciting programme steeped in both the baroque and folk music traditions, from the colourful and exciting sonatas of Castello and Uccellini to the grace and beauty of·ground basses by Purcell and Gibbon.

Tickets will be available for non-members: £12 (£5 for under 18s) available from the Dartington Box Office (01803 847070) and website (www.dartington.org), as soon as Dartington has been able to update it's website. Tickets also available on the door.

Further information on Morag and Matthew and their programme will be put on this website as soon as we receive it.

Confusion in the audience reigned for a while as it becane clear that the performers were following a different programme to that printed. However, we soon settled back in our seats and just enjoyed the wonderful music that Morag and Matt were playing. Their programme can be seen here along with accompanying notes.

THE BREWERY BAND
Grace and Fire